Rushabh Eye Hospital was founded on 15th August 1990 by Dr. Jayant Shah and Dr. Savita Shah. Since then, we have grown bigger and better to become a full-fledged Super-speciality Eye Hospital over the last three decades. With the introduction of the FDA-approved Visx Star S4 Excimer Laser in Rushabh Eye Hospital, we became one of the first Centers in Mumbai performing Laser Vision Correction for treatment of refractive errors.

Dr. Jayant Shah, was a renowned eye surgeon and humanitarian. He worked tirelessly to end avoidable blindness not only in Mumbai but also in parts of rural Maharashtra and Gujarat. Together, Drs. Jayant and Savita Shah, have helped over 10 lakh people restore their eyesight.

However, according to national surveys, even to this date, about 1% of the Indian population suffers from blindness, out of which almost 75% is avoidable. That means that, in a country with a population of over 1.3 billion people, about 13 million are blind and this is avoidable in about 9.75 million people.

Give the Gift of Sight to Our Future Carriers

Restore Vision With Us

What Exactly is Avoidable Blindness?

Eye diseases like cataract, refractive errors,  glaucoma, corneal diseases, diabetic retinopathy can lead to blindness, when in fact they are preventable or treatable. The reason people live with blindness is that they do not have access to timely and quality health care.
Cataract related blindness accounts for almost 63%, which can be prevented by a straight-forward 20 minute operation.
Whereas, in children almost 70% cases of vision impairment can be avoided simply by using spectacles.

Now Just imagine being blind purely because of circumstance. It’s almost unthinkable, yet millions of people in India are suffering from this exact fate. For most, it’s a cycle of poverty and disability – with one leading to the other. The incredible injustice of this is the driving force behind our work.

To provide affordable, comprehensive and quality eye care services to everyone.

‘To see is the right of every human being’. No one should remain blind for the lack of delivery of quality eye care.

The impact of restoring sight goes beyond treating blindness. Alleviating blindness is an effective way of easing poverty. A person who can see, can educate himself, work, earn a livelihood and support his family.

Our Journey So Far

Our journey started way back in the year 1991, when Drs. Jayant and Savita Shah, thought of contributing their skills and resources for the welfare of the poor. The whole family was very thrilled with the idea and we decided to start Eye Camps in Bhuj, Kutch where availability of even basic medical facilities was  limited. In the first camp, 62 patients were operated and every surgical instrument and surgical material was carried from Rushabh Eye Hospital, Mumbai to ensure quality. The experience was exhilarating. Everyone was so touched and humbled seeing the need of the people of the region. Armed with the surgeons skill, sophisticated equipment, and expanding volunteer team, from the year 1991 to 2000 Surgical eye camps were conducted annually.  The medical camps also included Gastroenterology, Orthopedic and Cardiology services. However, the annual Eye Camps at Bhuj could not be continued following the massive earthquake in 2001 that devastated the entire Kutch region.

This did open up newer avenues and led the team to Dhule – a small border town surrounded by tribal villages in Western Maharashtra in 1997. The community response in Dhule was phenomenal –from Volunteers to Doctors who offered their own hospitals and facilities, free of cost to support our cause.  Every year the number of patients served  increased by 45-50 %. Rushabh Eye Camp became a household name amongst far-flung villagers who would wait over a year to get treated. However, since the camp could accommodate only limited people due to time and resource constraints, it was heart-breaking to have to turn down patients, who would then have to wait another year or more in order to receive treatment.

Dr. Jagannath Wani, a philanthropist from Canada, who was native to Dhule was impressed by the work we did. He offered to hand over an entire hospital building (Kamlini Wani Hospital), which he had built , in Dhule,  under the auspice of Maharashtra Seva Samiti in Canada, to Dr. Jayant Shah to run and operate as a full fledged Eye Hospital. This is how ‘Sharda Netralay’ came into existence in 2004.

Today, Sharda Netralay is a high-volume, super speciality eye hospital with a team of Eye surgeons, Optometrists and paramedical staff along with an Optometry college, which provides subsidised and free eye care facilities round the year to all those who need it.

Our Work in Mumbai

Rushabh Eye Hospital has conducted several eye camps for Senior citizens, women and children, Diabetic screening camps, school eye camps, awareness camps and more over the last 30 years. We wish to extend all our services to the lesser privileged sections of the community, so that no one is denied treatment due to financial constraints.

Sundeep Foundation is a registered charity involved in charitable activities in health care and education. It is registered with the Charity Commissioner of Maharashtra and with the Ministry of Home Affairs under the Foreign Contribution Regulation Act (FCRA). They have been organizing Rushabh Netrayagna, a camp for free cataract surgeries, every year since 1992 in Maharashtra and Gujarat . In these camps, more than 3400 underprivileged, less fortunate patients have received cataract surgeries with IOL implants at absolutely no cost.

Volunteers and donors associated with Rushabh eye hospital have been performing free rural hospital-based cataract surgeries in the rural areas of Gujarat and Maharashtra for the past 28 years. This has been aided with the help of donors from India as well as abroad. This culminated with the development of Sharda Netralay in the year 2004, a full-fledged modern eye hospital in the District of Dhule in the interiors of Maharashtra. Sharda Netralay is a state of the art Eye hospital with all the latest equipment which has been serving the poor since its inception. 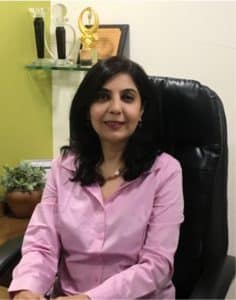 She is the Medical Director of Rushabh Eye Hospital and Laser Centre and a renowned eye surgeon in Mumbai, with several accolades to her name. Continuing the work she started 3 decades ago with her husband, Dr. Savita Shah has been a strong guiding force behind the formation of this Charitable unit. The initiation of the Charitable Wing has been her idea and her dream. She has been actively involved in social work since her childhood, when she would accompany her parents, Drs. Jayant and Savita Shah, to volunteer at the annual eye camps at Bhuj and Dhule. She is a fellowship trained and experienced eye surgeon, who wants to continue the goodwill her parents started.